The Top Religious Groups in the World

Top 8 Religious Groups in the World


I'll start today with some tables and charts showing the size of the top 8 World Religious Groups according to the Pew Research Center from 2010-12. 1 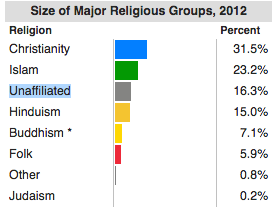 - Unaffiliated refers to agnostics, atheists, nonreligious, secular, humanists, and people who answered 'none'. Half of this group believe in a god, but are not religious.
- Folk Religions include African traditional religions, Chinese Folk religions, Native American religions, and Australian Aboriginal religions.
- Other Religions include the Baha’i faith, Taoism, Jainism, Shintoism, Sikhism, Tenrikyo, Wicca, Zoroastrianism and many others.

So, looking at these figures, 9 out of 10 people in the world believe in a god, a supernatural being, or adhere to some belief or activity that is very important to them.

These are just some basic statistics about the world's religions and the enormous influence that religions have over people in the world. I use the word 'influence' because the majority of religions have some institutionalized system of beliefs, practices, views, convictions, rules, creeds, and ideology that its members follow, observe, and obey.

On this blog, I will be looking primarily at Christianity, since this is what I am most familiar with, but I will be addressing other religions as well in the future on my website origins of religions  HERE


The next Blog will ask and answer some questions as to why I am choosing to leave the religion of Christianity, even though the overwhelming majority of people in the world have belief in a religion.

1. [Pew Research Center is a nonpartisan fact tank that informs the public about the issues, attitudes and trends shaping America and the world 1]↩
2. [Population Reference Bureau's 2010 World Population Data Sheet
-Accessed 06/13/16 -http://www.prb.org/Publications/Datasheets/2010/2010wpds.aspx 2]↩
Posted by DL deBolt at 7:35 AM